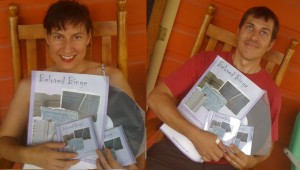 If “indie pop half greek harmony” doesn’t mean anything to you, then you’re missing out on the wild sounds of Beloved Binge aka Rob Beloved and Eleni Binge. These two tackle drums and guitar with energetic arrangements and a delightful sense of play. This month, they release Pockets, a brand new record to treat your ears.

So sure, these two have their acts together, but can they handle our five questions? See for yourself after the jump!

1. If your band were a club, what sort would it be? 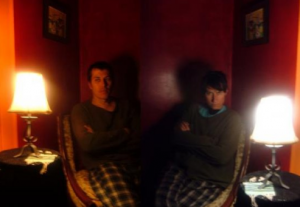 Beloved Binge are a mixture of quasi-dive and house show. Quasi since we like toilet paper in our dive restrooms, and there should not be a sign like the one we saw in NYC once, stating, “No number 2 – weak plumbing.” We want our options open.
Rob says: “It would be like the Pinhook.”

2. What can listeners expect from the new Beloved Binge record?
We like to tell ourselves that this record is more grown up than past albums, but still the same silly mixed with deeper loss and death themes in songs like “Does ‘Things could be worse’ mean I should be happy?” or “Born,” and “Some People Think I’m Nuts.” One friend who has had the opportunity to listen to the album for the past few months said it helped her get through some heavy life stuff. That made us so happy – we think music is the opposite of war and should be, ultimately, life-giving rather than taking.
Life is a mosaic of funny, sad, angry, and hopeful. We hope the fullness of these experiences also can be found on our album. A few people have told us it’s our best yet – but maybe that just means our last three were real stinkers.
Just kidding, people seemed to receive Blender Theory and Other Places very well.

3. Describe your typical band practice.
Eleni (me) yelling about a new crazy song idea; Rob ignoring, and a pretend web cam to catch all this and keep me in line. I always joke to people that we argue all throughout practice, and thank gawd we now have our friend Mike Wright (aka Tofu Mama) whom we’ve known 10 years back from Seattle playing bass with us to improve the dynamic. Part of this is true, but we’ve also been working on songs together for the last 12 years – and not many people can stick with it that long. We’re a couple, so that definitely creates a certain comfortable dynamic. Practice is better when red wine is involved. We practice at our home, but honestly I’d prefer to have a separate rehearsal space. I’ve come to the realization lately that the home, though it can be a gym, work place, and rehearsal zone, should not be: each of these is better-served in a separate space. 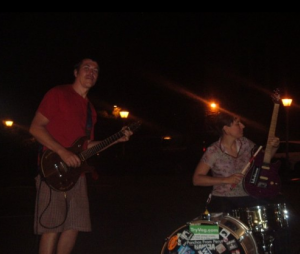 4. Who/what might be a few inspirations or influences that would really surprise people?
I’m not sure if Rob’s Metallica influences would surprise anyone, but when I played a high-school tape of his band they sounded like a Metallica cover band. I’m inspired by Yoko, but not musically — moreso her attitude and creativity. I grew up with classical musicians on my Mom’s side, and listening to Greek folk on my Dad’s side — both of these were influential in informing melody and rhythms respectively. In fact, I play Bouzouki (Greek instrument) in a couple of our songs.
Rob’s influence of the Velvet Underground, Joy Division, and the Cure are probably not surprises. Eleni also was a huge Def Leppard fan (pre-Hysteria).

5. What did you dream of being when you were a kid? (How â€™d that turn out?)
Personally, I wanted to be a news anchor. Years later, not even having a TV in the house, disliking the particular theater of some news stations immensely, I wondered why this would be something I chose. Then I realized that in the household I grew up in, local news was on religiously in the AM and PM. My mom’s side of the family looked up to news; it was natural that I’d want to be part of that. I also wanted to be a writer, and wrote a book “The Black Cat” when I was 10. I still love to write and am working on a book “Tales of a Greek Father” based on writings from my late father and the story of his life.
Rob Beloved wanted to be a carpenter, and lo and behold here he is carpenter-ing.

Bop on over to The Pinhook Saturday, Sept 22nd for a triple release show featuring Beloved Binge, Billy Sugarfix, and Elletronic. And, by all means, give Eleni and Rob high fives when you see them!