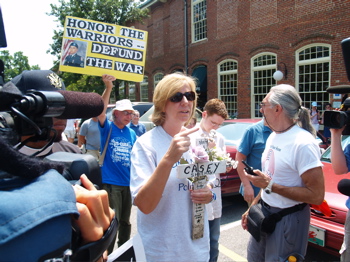 Bit of a media madhouse this afternnon as Cindy Sheehan made her way into town for lunch with Mayor Mark Chilton and members of GRIM â€” Grass Roots Impeachment Movement. They’re touting Carrboro as “The Cradle of Impeachment” since the organization has been one of the earliest and most active impeachments groups in the South.

Mayor Chilton says he was invited by GRIM, but didn’t say he was in support of impeachment. He did say he’ll be willing to share his specific views on the matter soon.

Photos from Carr Mill and Panzenella.

Says she will announce Monday unless the Speaker puts “impeachment on the table.” 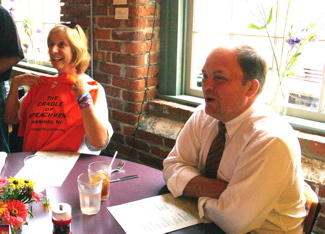 3 replies on “Sheehan on impeachment, Pelosi”

[…] Not going to duplicate them here, but we’re following the Cindy Sheehan visit to Carrboro at The Mill. […]

Cindy Sheehan: This is NOT a Rally…

[UPDATE:] More from the CarrboroCitizen.
Peggy Misch wants to make sure everyone knows, in spite of what the local press says, there is no Sheehan rally at Carr Mill Mall. Just a simple lunch with Carrboro Mayor Mark Chilton and some folks from GRIM …

“I’ll share my specific views on the issue soon”…But I’ll take the Photo Op now, if you please…