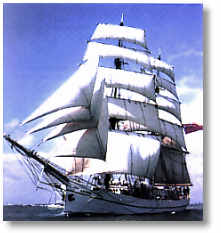 How do I download this Mp3?
Mp3: Handsome Cabin Boy, The
A popular broadside ballad of shipboard carryings-on.
This version from Louis Killen; it derives from that sung by one of the
greatest ballad singers of all times, Jeannie Robertson of Aberdeen.
The sailors made up these tales to amuse themselves on their long
voyages.

The guitar on this is a Rickenbacker 730L/12 acoustic, in two
inversions, E and with a capo on the second fret in the D position.

Lyrics:
E D E
It’s of a pretty female as you will understand
Her mind was set on rambling into a foreign land
She dressed herself in man’s attire and boldly did appear
And she engaged with a captain to serve him for a year.

The captain’s lady being on board, she seemed in great joy
To think that the captain had engaged such a handsome cabin boy
And many’s the time she cuddled and kissed, and she would have
liked to toy
But ’twas the captain found out the secret of the handsome cabin
boy

Her cheeks they were like roses, her hair was all a-curl
The sailors often smiled and said, he looks just like a girl
But eating the captain’s biscuit, well, her color it did destroy
And the waist did swell of pretty Nell, the handsome cabin boy.

It’s doctor, dearest doctor, the cabin boy did cry
My time has come, I am undone, surely I must die
The doctor ran with all his might, a-smiling at the fun
For to think a cabin boy could have a daughter or a son

Now when the sailors heard the joke, they all began to stare
The child belongs to none of us, they solemnly did swear
And the lady to the captain said ‘My dear I wish you joy
For it was either you or I betrayed the handsome cabin boy.’

Come all of you bold fellows and we’ll drink success to trade
And likewise to the cabin boy who was neither man nor maid
And if the wars should rise again, us sailors to destroy
Well, here’s hoping for a jolly lot more like the handsome cabin
boy.
ï¿½ 1998 McGuinn Music â€“ Roger McGuinn