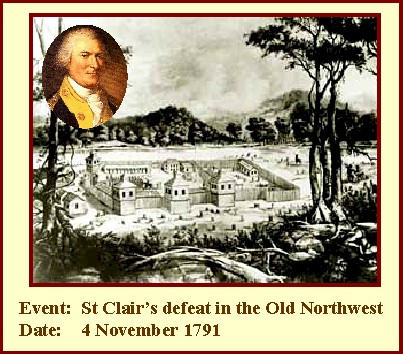 How do I download this Mp3?
Mp3: St. Clair’s Defeat
I first heard this song at the Gate of Horn in Chicago. Bob Gibson and Bob Camp were a duo for a short time and this was one of thier most intense songs. It’s about The Battle of Wabash River. It was also known as ‘St. Clair’s Defeat’ which was fought on November 4, 1791 between the United States and an American Indian confederacy, as part of the Northwest Indian War (also known as ‘Little Turtle’s War’). The American Indians were led by Michikinikwa (‘Little Turtle’) of the Miamis and Blue Jacket of the Shawnees. The Americans were led by General Arthur St. Clair. The Indian confederacy was victorious. The battle was the most severe defeat ever suffered by the United States at the hands of American Indians; indeed, in proportional terms it was the worst defeat that United States forces have ever suffered in battle. As a result, President George Washington forced St. Clair to resign his post, and Congress initiated its first investigation of the executive branch.
More information at these URLs:
wikipedia.org
QM Museum
Ohio
britannica.com
Lyrics:
[Em] Was November the fourth in the [G] year of ninety-[D] one
[Em] We had a sore engagement near [D] to [Em] Fort [D] Jeffer [Em] son
[G] Sinclair was our commander, which [Bm] may remembered be
[Em] But we left nine hundred soldiers in [D] that [Em] Western Terri[D] tory[Em]At Bunker’s Hill and in Quebec, where many a hero fell
Likewise out on Long Island, it is I the truth can tell
But such a dreadful carnage, never did I see
As happened all out on the plains, near the River St. Marie

Our militia was attacked, just as the day did break
And soon were overpowered, and forced into retreat
They killed major Ouldham, and major Briggs likewise
While horrid yells of anguished souls resounded through the skies

Major Butler he was wounded the very second fire
His manly bosom swelled with rage they forced him to retire
Like one distracted he appeared, when thus exclaim-ed he
Ye hounds of Hell shall all be slain but what revenged I’ll be

We had not very long been broke, when General Butler fell
He cries my boys I’m wounded, pray take me off this field
My word says he, what shall we do, we’re wounded every man
Go charge your valiant heros and beat them if you can

He leaned his back against a tree, and there resigned his breath
And like a valiant soldier, sunk into the arms of death
When blessed angels did await, his spirit to convey
Into celestial fields, he did quickly bend his way

We charged again and took our ground, which did our hearts elate
But there we did not tarry long, they soon made us retreat
They killed our major Ferguson, which caused his men to cry
Stand to your guns says valiant Ford, we’ll fight until we die

Our cannon balls exhausted, artillery men all slain
Our musketeers and riflemen, their fire they did sustain
Three hours more we fought like men, and they were forced to yield
While three hundred bloody warriors lay stretched across the filed

Says colonel Gibson to his men, my boys be not dismayed
I’m sure that true Virginians were never yet afraid
Ten thousand deaths I’d rather die, than they should gain this field
With that he got a fatal shot, causing him to yield

Says major Clark, my heros, we can no longer stand
We shall strive to form in order, and retreat the best we can
The word retreat being passed around, they raised a dreadful cry
Then helter skelter through the woods like wolves and sheep they fly

We left the wounded on the field, O heavens what a shock!
And many bones were shattered, and strewn across the rock
With scalping knives and tomahawks, they robbed some of their breath
While raging flames of torment, tortured other men to death

Was November the fourth in the year of ninety-one
We had a sore engagement near to Fort Jefferson
Sinclair was our commander, which may remembered be
But we left nine hundred soldiers in that Western Territory