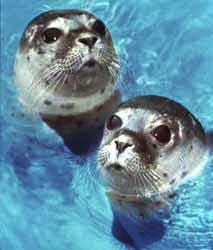 How do I download this Mp3?
Mp3: The Great Silkie
This is Child Ballad No.113
“The Great Silkie of Sule Skerry” is one of numerous tales of
the Silkies, or seafolk, known to the inhabitants of the Orkney
Islands and the Hebrides. These enchanted creatures dwell in the
depth of the sea, occasionally doffing their seal skins to pass
on land as mortal men. Legend has it that they then accept human
partners, and some families on the islands actually trace their
ancestry to such marriages. In more complete versions of the
ballad, the Silkie’s forecast of the death of himself and his son
eventually come to pass.
Thanks to Mudcat Cafe for that information
Lyrics:
[G] An earthly [F] nurse sits and [G] sings,
And aye, she [C] sings by [D] lily [G] wean,
And [C] little ken [D] I my bairn’s [G] father,
Far [F] less the land where he [G] dwells in.

For he came on night to her bed feet,
And a grumbly guest, I’m sure was he,
Saying “Here am I, thy bairn’s father,
Although I be not comely.”

“I am a man upon the land,
I am a silkie on the sea,
And when I’m far and far frae land,
My home it is in Sule Skerrie.”

And he had ta’en a purse of gold
And he had placed it upon her knee,
Saying, “Give to me my little young son,
And take thee up thy nurse’s fee.”

“And it shall come to pass on a summer’s day,
When the sun shines bright on every stane,
I’ll come and fetch my little young son,
And teach him how to swim the faem.”

“And ye shall marry a gunner good,
And a right fine gunner I’m sure he’ll be,
And the very first shot that e’er he shoots
Will kill both my young son and me.”