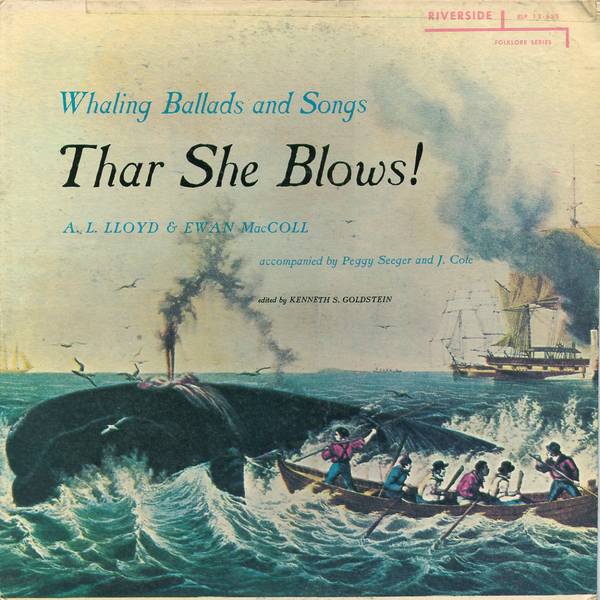 How do I download this Mp3?
Mp3: The Coast of Peru – Click To Play
One of my favorite folk albums is “Thar She Blows” with A. L. Lloyd and Ewan MacColl on vocals, Peggy Seeger on banjo/guitar and John Cole on harmonica. I recorded this song in Lloyd’s vocal style, adding mandolin, banjo and guitar.

Here are some notes from A. L. Lloyd:

“The English whaling ship Emilia was the first to inaugurate the Pacific sperm whale fishery in 1788, rounding Cape Horn to fish in the waters of the South Sea islands and the coasts of Chile and Peru. By the 1840s, the days of the South Seamen were numbered, but they left behind a fine memorial in their songs, of which The Coast of Peru is perhaps the most impressive. Tumbez, mentioned in the last verse, is in the far north of Peru, on the Gulf of Guayaquil, near the equator. Its girls are remembered in several whaling songs.

By no means all the old time whaling was done in northern waters. In the 1820s, for example, more than a hundred British ships, mostly out of Hull or London, where fishing in the sperm whale grounds round the Horn off the coast of Chile and Peru and taking the long, long run across the Pacific by way of Galapagos Island and the Marquesas, to Timor. The trip would last three years. The Coast of Peru is the most important ballad of the South-Seamen. Possibly it describes the chase of a southern right whale, not a sperm. Sperms were usually harpooned by running the boat close to the whale. Right whales, who tend to fight with their tail, were more often harpooned with the â€œlong dartâ€ from perhaps ten yards away. Mention of the mate in the â€œmain chainsâ€ dates the song before the 1840s.”

[Dm] Come all you young [C] sailor-men who rounded [Dm] Cape Horn,
Come all you bold whalers who follow the sperm,
Our captain has told us and we hope he says true,
[Dm] There’s plenty of [C] sperm whale on the [Dm] coast of Peru.

It was was early one morning just as the sun rose,
The man on the for-mast sung out: â€œThere she blows!â€
â€œWhere away?â€ says the captain, â€œand where does she lay?â€
â€œThree points to the east, sir, not a mile away.â€

Then it’s lower your boats me boys and after him travel
Steer clear of his flukes or he’ll flip you to the devil
And lay on them oars boys and let your boats fly
But one thing we dread of, keep clear of his eye!â€

Well the waist-boat got down, and we made a good start.
â€œLay on said the harpooneer for I’m hell for a long dart.â€
Well the harpoon it struck and the whale sped away
But whatever he done, me boys, he gave us fair play.

Come all you young sailor-men who rounded Cape Horn,
Come all you bold whalers who follow the sperm,
Our captain has told us and we hope he says true,
There’s plenty of sperm whale on the coast of Peru.