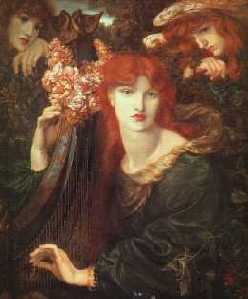 In the 15th through the early 17th centuries, music began to be printed and sold. Musical themes spread rapidly throughout Europe, particularly those developed by the troubadours of Provence in earlier centuries. With the coming of the Renaissance, the Church lost some of its power to control ideas. The notion of courtly love, so despised by the clergy, was celebrated once again. Of course it was hardly taken seriously, but its imagery was still powerful and it sounded good.

There is a long standing debate over whether England’s King Henry VIII (circa: ) did, in fact, write “Greensleeves,” one of the most celebrated, and certainly most frequently performed, love songs ever written. It’s doubtful whether we can ever know for sure. This much we do know: Henry VIII was well educated and thought of himself as quite the Renaissance man. He played several instruments including organ, harp, and virginals, so he certainly could have picked out the melody. We have a love letter written by him to Anne Boleyn which displays an eloquence (and impatience) that leads one to believe he could have written the song’s lyrics. Lines from this letter such as “struck by the dart of love” sound a bit trite, but it shows he probably knew a decent metaphor when he heard one. Most likely the tune already existed and Henry simply added his own lyrics since this was a perfectly acceptable practice in those days. Henry, no doubt thought of himself as a latter day troubadour wooing his lady love. But, as Anne was to find out, like some other troubadours of olde, Henry was a fickle lover and quickly moved on the next muse.

Punning sexual allusions and bawdy language were quite common in the love songs of this period. The Renaissance delighted in images of outdoor lovemaking and thinly disguised it by employing the metaphor of dancing as in Thomas Morley’s song, “Now Is the Month of Maying” (‘Barley-break’ is Renaissance-speak for ‘a roll in the hay’)

The Spring, clad all in gladness,
Doth laugh at Winter’s sadness, fa la,
And to the bagpipe’s sound
The nymphs tread out their ground, fa la.
Fie then, why sit we musing,
Youth’s sweet delight refusing, fa la.
Say, dainty nymphs, and speak,
Shall we play at barley-break? fa la.

During the reign of Elizabeth I, Shakespeare, like other playwrights, sprinkled songs throughout his stage plays. We don’t have know the original melodies but, like Greensleeves, they were probably sung to well-known tunes of the day, whichever ones the actors happened to know. Although Shakespeare’s love sonnets are deeply moving, the love songs in his plays tend to be more for laughs. Slow ballads probably didn’t go over well with a rambunctious live audience just waiting for an excuse to throw rotten vegetables!
. . .

Your vows you’ve broken, like my heart,
Oh, why did you so enrapture me?
Now I remain in a world apart
But my heart remains in captivity.

If you intend thus to disdain,
It does the more enrapture me,
And even so, I still remain
A lover in captivity.

My men were clothed all in green,
And they did ever wait on thee;
All this was gallant to be seen,
And yet you wouldst not love me.

You couldst desire no earthly thing,
but still you hadst it readily.
Your music still to play and sing;
And yet you wouldst not love me.

Ah, Greensleeves, now farewell, adieu,
To God I pray to prosper thee,
For I am still thy lover true,
Come once again and love me. . . .