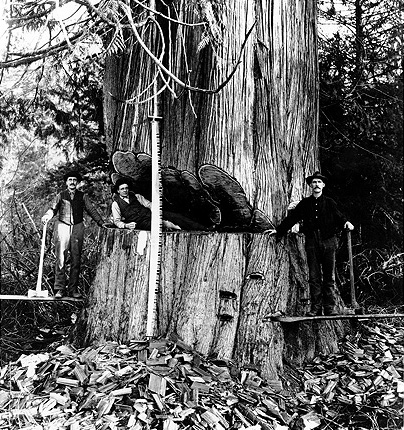 How do I download this Mp3?
Mp3: Frozen Logger
Frank Hamilton played banjo on this at the Old Town School of Folk Music in 1957. It’s a funny song written by James Stevens, the man who made Paul Bunyan famous. Loggers are a tough bunch according to this song and it’s probably true given the harsh conditions they work under! Camilla and I have been traveling in the Northwest for the last two weeks and I decided to record this as a reminder of the end of a wonderful two month tour.
Lyrics:
The Frozen Logger
(James Stevens)

“I see that you are a logger, and not just a common bum,
‘Cause nobody but a logger stirs his coffee with is thumb.

My lover was a logger, there’s none like him today;
If you’d pour whiskey on it he could eat a bale of hay

My lover came to see me upon one freezing day;
He held me in his fond embrace which broke three vertebrae.

He kissed me when we parted, so hard that he broke my jaw;
I could not speak to tell him he’d forgot his mackinaw.

I saw my lover leaving, sauntering through the snow,
Going gaily homeward at forty-eight below.

The weather it tried to freeze him, it tried its level best;
At a hundred degrees below zero, he buttoned up his vest.

It froze clean through to China, it froze to the stars above;
At a thousand degrees below zero, it froze my logger love.

They tried in vain to thaw him, and would you believe me, sir
They made him into axeblades, to chop the Douglas fir.

And so I lost my lover, and to this cafe I come,
And here I wait till someone stirs his coffee with his thumb.”