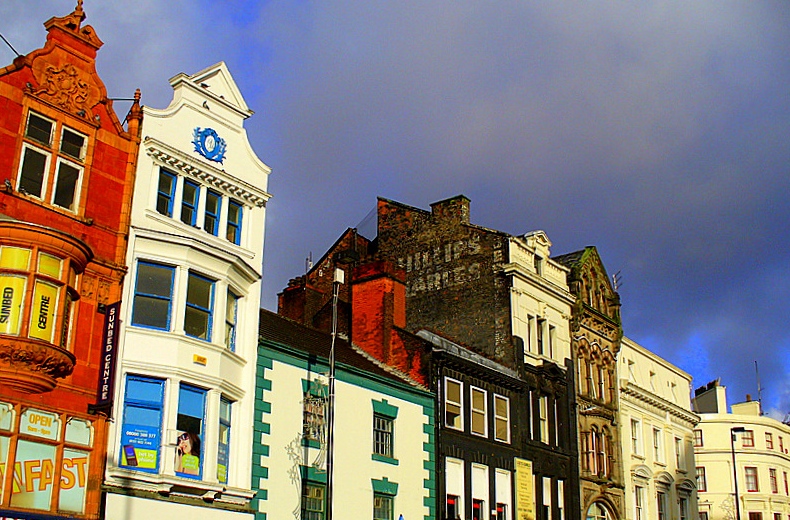 How do I download this Mp3?
Mp3: Paddy West – Click To Play
A.L. Lloyd sang Paddy West in 1960 on his and Ewan MacColl’s Tradition Records album Blow Boys Blow. He commented in the sleeve notes:

“Mr West is a redoubtable figure in the folklore of the sea. He was a Liverpool boarding-house keeper in the latter days of sail, who provided ship captains with crews, as a side-line. He would guarantee that every man he supplied had crossed the Line and been round the Horn several times. In order to say so with a clear conscience, he gave greenhorns a curious course in seamanship, described in this jesting ballad. It was a great favourite with â€œScouseâ€ (Liverpool) sailors.”

Paddy was a resourceful fellow who, with his wife, ran a home school for novice sailors. His methods were rather crude (like having his wife throw a bucket of water on their students to provide ‘sea spray’) but together they created a simulation of real conditions that could instill a sense of confidence in the lads that would most likely help them on an actual ocean voyage.

I accompanied myself on my Martin HD-7 seven string guitar and an English concertina that my wife Camilla gave me.

2. When we had finished our dinner lads,
The winds began to blow.
Paddy sent me to the attic,
The main-royal for to stow,
But when I got to the attic,
No main-royal could I find,
So I turned myself around,
And I furled the window blind.
Chorus:

3. Now Paddy he pipes all hands on deck,
Their stations for to man.
His wife she stood in the doorway,
A bucket in her hand;
And Paddy he cries, “Now let ‘er rip!”
And she throws the water our way,
Cryin’ “Clew in the fore t’gan’sl, boys,
She’s takin on the spray!”
Chorus:

4. Now seein’ she’s headed south’ard,
To Frisco she was bound;
Paddy he takes a length of rope,
And he lays it on the ground,
We all steps over, and back again,
He says to me “That’s fine,
If they ask you were you ever at sea
You say you crossed the line.”
Chorus:

5. There’s just one thing for you to do
Before you sail away,
Step around the table,
Where the bullock’s horn do lay
And if they ask “Were you ever at sea?”
Say “Ten times ’round the Horn”
And they’ll think you’re a natural sailor lad
From the day that you was born.
Chorus: X 2