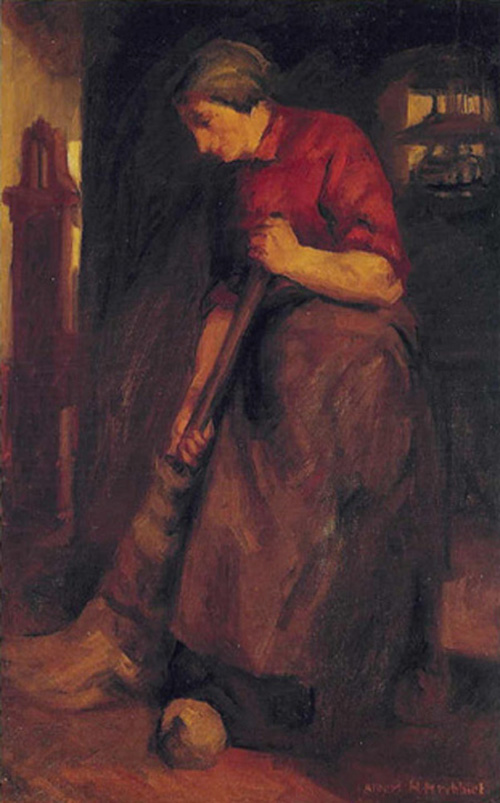 How do I download this Mp3?
Mp3: Housewife’s Lament
I learned “Housewife’s Lament” at the Old Town School of Folk Music in Chicago around 1958. It’s kind of a bitter portrayal of the lot of women in the not-so-distant past. There is a verse at the end where the poor housewife dies and gets covered with dirt, which is supposed to be funny, but I thought there was enough hardship in this song without adding insult to injury, so I left it out.
Lyrics:
[G] One day I was walking,
I heard [Am] a complaining,
I saw a [D] poor woman
The [C] picture of [G] gloom.
She gazed in the mud
On her [Am] doorstep (’twas raining),
And [D] this was her song
As she [C] wielded her [G] broom:

In March it is mud,
It’s slush in December,
The midsummer breezes
Are loaded with dust.
In fall the leaves litter,
In muddy November
The wallpaper rots
And the candlesticks rust.

It’s sweeping at six
And i’s dusting at seven, ( I know I sang 11 but it should be 7 🙂
It’s victuals at eight
And it’s dishes at nine.
It’s potting and panning
From ten to eleven.
We scarce break our fast
Till we plan how to dine.

Last night in my dreams
I was stationed forever,
On a far distant rock
In the midst of the sea.
My one task of life
Was a ceaseless endeavor,
To brush off the waves
As they swept over me.