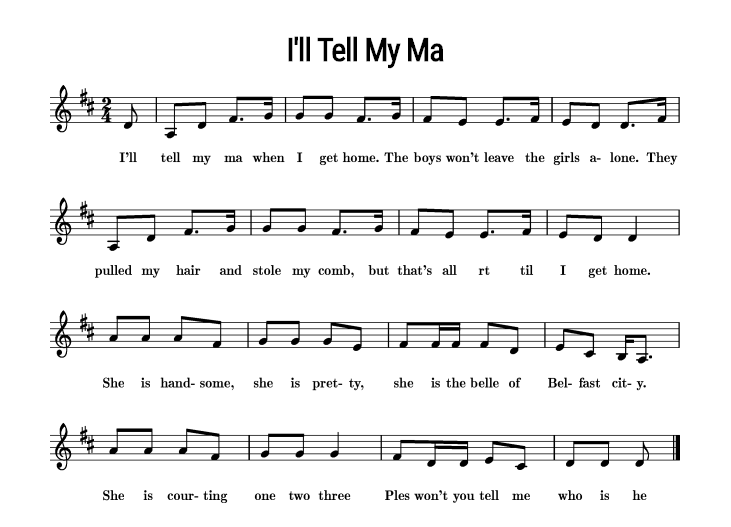 How do I download this Mp3?
Mp3: The Belle of Belfast City – Click To Play
This is a well known children’s song from the 19th century. It is in the Roud Folk Song Index as number 2649. It’s been collected in various parts of England and Ireland. When sung in Northern Ireland it’s known as “The Belle of Belfast City.” There is a game associated with this song. Children form a ring by joining hands while one child stands in the middle. When asked “Please tell me who they be?” The child in the middle gives the name or initials of a child in the ring and after the rest of the lyrics are sung the named child goes in the middle.
Lyrics:
[G] I’ll tell my ma [C] when I get home,
[G] The boys won’t leave [D] the girls alone
[G] They pull my hair and [C] stole my comb
[D] But that’s all right [G] till I go home

Albert Mooney says he loves her,
All the boys are fightin’ for her
Knock at the door and ring at the bell,
Saying oh my true love, are you well

Out she comes as white as snow,
Rings on her fingers, bells on her toes
Ould Johnny Morrissey says she’ll die
If she doesn’t get the fella with the roving eye

Let the wind and the rain and the hail blow high
And the snow come travellin’ through the sky
She’s as sweet as apple pie,
She’ll get her own lad by and by