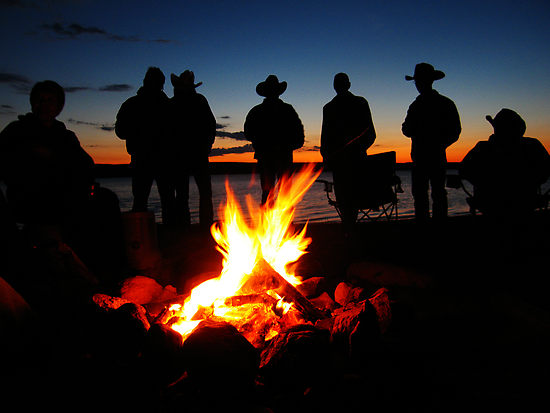 How do I download this Mp3?
Mp3: Home On The Range
In the mid to late 40s, I was in love with the Wild West. I had cowboy boots, two cap guns, a cowboy hat, and Roy Rogers was my hero. It was a magical time when the lines between good and evil were so clearly defined, and the good guys always won. I have wonderful memories of riding the range of Chicago on my bicycle, and singing the cowboy songs that I heard on the radio. This was one of those songs. According to Alan Lomax, it was first printed in 1911, and for twenty years attracted practically no attention. It is said to have been sung on the doorstep of Franklin D. Roosevelt's home by a group of newspaper reporters the night he was first elected president. So here it is in honor of the late Roy Rogers.
Lyrics:
[G] Oh give me a home where the [C] buffalo roam
And the [G] deer and the antelope [D] play
Where [G] seldom is heard a [C] discouraging word
And the [G] skies are not [D] cloudy all [G] day

Oh give me a land where the bright diamond sand
Flows leisurely down the stream;
There the graceful, white swan goes gliding along
Like a maid in a heavenly dream

Where the air is so pure, the zephyrs so free
The breezes so balmy and light
That I would not exchange my home on the range
For all of the cities so bright

Dr. Brewster Higley (b. 1822) of Indiana wrote this song when he lived in Kansas. The words were printed in a local paper (1873) and became a favorite song along the cattle trails. First published in 1910. The author never saw nor received a cent of royalty. His last home was in Shawnee, Ok., where he died May 17, 1911.

Thanks to David Fox for providing this information.