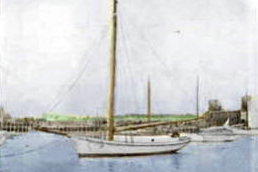 How do I download this Mp3?
Mp3: The John B’s Sails
This is a sea song from around Nassau. We recorded this at Ridley Pearson’s house at the beginning of the Rock Bottom Remainders Wannapalooza 2004 Tour. Riddley, Dave Barry, Greg Iles, and I were the vocalists. Ridley played bass, and I played 6-string acoustic and Rickenbacker 12-string electric guitars.

‘John T. McCutcheon, cartoonist and kindly philosopher, and his wife Eveleyn Shaw McCutcheon, mother and poet, learned to sing this song on their Treasure Island in the West Indies. They tell of it, ‘Time and usage have given this song almost the dignity of a national anthem around Nassau. The weathered ribs of the historic craft lie embedded in the sand at Governor’s Harbour, when an expedition, especially set up for the purpose in 1926, extracted a knee of horseflesh and a ring-bolt. These relics are now preserved and built into the Watch Tower, designed by Mr. Howard Shaw and built on our southern coast a couple of points east by north of the star Canopus.’

In his book, ‘ FOLKSONGS OF NORTH-AMERICA,’ John Lomax offers short bits of descriptive prose to set the scene for his collected works.

Here is his entry for ‘THE JOHN B’s SAILS’:

‘The small boat piers of Nassau Harbor form the market-place of the Bahamas. The dirty, sea-scarred sloops, tethered on the pale blue water, are like so many country wagons loaded with produce for sale in the capital. A sixteen-footer stands in towards the dock, its deck only a few inches above the waves, carrying a cow, five goats, a dozen hens, four women, six children, and four of five sailors. This crowded little boat is ending a journey from an island, perhaps two or three hundred miles away. As it noses into the pier, a similar craft lifts its ragged sail and departs, its deck packed with passengers and freight, for some coral islet far down the chain toward Haiti.

These vessels carry no charts, no compasses, and no auxiliary engines, yet few of them come to grief, for the Bahaman is at home in his reef-filled azure seas. They tell and believe a story about an old sea pilot, grown blind, who could stick his finger in the water and tell precisely where his boat lay.’

First mate, he got drunk.
Broke up the people’s trunk.
Constable had to come and take him away.
Sheriff John Stone,
why don’t you leave me alone?
Well, I feel so break up, I want to go home.

Well, the poor cook he caught the fits.
Throw away all of my grits.
Then he took and he ate up all of my corn.
Let me go home.
I want to go home.
This is the worst trip since I’ve been born.