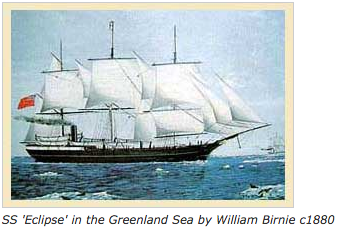 “The Eclipse” was one of the first seafaring songs to grab my attention. It was on the album “Thar She Blows” By Ewan MacColl and A. L. Lloyd. It tells the true story of three ships whaling in Queen Victoria’s year of Jubilee 1887. The trip was a miserable failure.

In the year of Queen Victoria’s jubilee, 1887, the steamer Eclipse of Stonehaven went fishing in the Arctic with her sister ships the Eric and the Hope. Her captain, David Gray, was on one of the greatest of nineteenth century whaling skippers. By now the northern waters were nearly fished clean of right whales, and the Scottish fleet was taking whatever it could – white whales, narwhales, bottlenooses (David Gray was the first hunter of bottlenoose whale). The 1887 season was disastrous. The Erik caught one small whale, the Hope none at all. On June 21st, David Gray took a good fat 57-foot cow whose jawbones are still on show in London’s Natural History Museum, but even the Eclipse, that luckiest of whalers, came home light, and with a bonus of only one-and-threepence a ton for oil. Her crew felt the trip had hardly been worth the hardship, and they marched through the streets of Peterhead to tell the owners so. The Eclipse made her first voyage in 1867. When she finished whaling, she was sold to the Russians and, renamed the Lomonosov, she was still being used as a survey ship along the Siberian coast as late as 1939.

The boats they pulled to leeward, went skipping over the sea,
And we killed this noble whale-fish for another jubilee.

Our Captain Davie Gray was kind and he gave his crew a treat,
And that was why we caught this whale that measured fifty feet.

The Eclipse she lies to windward, her colours she does flee,
And the Erik and the Hope also, and this is the jubilee.

The Erik caught a sperm-whale that measured forty-three,
But the Hope has none and shall get none this year of jubilee.

But when this trip is over we’ll not ship for one and three,
Because we didn’t get fair play in the year of jubilee.

We’ll march up to the Custom House where we do all sign clear,
And when we face old Bless-My-Soul we’ll tell him without fear.

We’ll tell him that we’ll never sign again for one and three,
And we’ll march through Commercial Street and sing the jubilee.