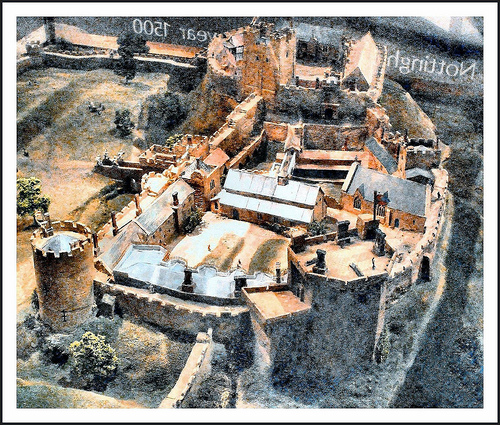 How do I download this Mp3?
Mp3: Fair Nottamun Town
This is one of those enigmatic songs with a lovely haunting melody. I first heard 'Fair Nottamun Town' performed in 1957, by Jean Ritchie on an Elektra Records Folk Sampler. The name of the town was originally Nottingham, and the lyrics got 'distilled' in the Appalachian Mountains. This is a great example of the folk process.

The lyrics are quite surreal, and may have originally been inspired by a battle of The English Civil Wars of 1642-51. The tension between Charles and Parliament was still great, since none of the issues raised by the Short
Parliament had been resolved. This tension was brought to a head on January 4th, 1642 when Charles attempted to arrest five members of parliament. This attempt failed, since they were spirited away before the king's troops arrived. Charles left London and both he and parliament began to stockpile military resources and recruit troops.

Charles officially began the war by raising his standard at Nottingham in August, 1642. This song may have been the bizarre observations of one of King Charles' mounted soldiers.

This is Jean Ritchie here; I loved listening to your music on the web, and
appreciate your interest in folk music. Your singing of 'Fair Nottamun Town'
was especially fine and I felt I must write to give you my history with the
song. The version you perform is the Ritchie Family (Kentucky) version. I
have never heard JJ Niles sing it, nor has anyone else I know- I knew him
quite well; he visited and got songs from the family in his early days, and
it was there he saw his first dulcimer, but to my knowledge he never
performed, 'Nottamun Town.' The time you heard him must have been the only
one, and he certainly learned it from the Ritchies.

The song has been in our family back many generations, and was collected at
the Hindman Settlement School in Knott County, KY by Cecil Sharp around 1917
from the singing of my sister Una who was a student there (Una was 4th in our
family of 14; I'm 'the baby one,' and am 77 now). Our family ancestors came
over from England, Scotland, Ireland, the earliest ones we know of arrived in
1768. Our family still cherishes and sings the songs they brought with them.

If you will check in Sharp's book of Appalachian songs he collected, you will
find the Ritchie version- the one you sing- as notated from the singing of
Una and Sabrina Ritchie (Sabrina was our cousin). I added the 'mule roany
mare' phrase, instead of 'that was called a grey mare.' Also, it always
bothered me that one-half of one of the verses was missing- just filled in
with dots…. then the last two lines are the ones beginning, 'I bought me
a quart…' For years, I sang, 'la,la,la,' for those missing lines, but
finally just put in two of my own, 'They laughed and they smiled, not a soul
did look gay; they talked all the while, not a word did they say…'

In the sixties, when the Kingston Trio and others began performing and
copywriting (as writers) our family songs, I applied for several copyrights
for the family. A copyright for 'Fair Nottamun Town' was approved in 1964,
based on the changes I had made in the lyrics. I have contributed much of
the royalties (from Bob Dylan and others) to Kentucky charities over the
years.

Your suggestion that the song may have been inspired by the English Civil
Wars of 1642-51 is most interesting. I had heard another suggestion of it's
possible origins, years ago, saying that it may have been composed during
the Great Plague! When I did my Fulbright year, searching for sources of
our family songs,in 1952, I spent time researching in Nottingham, and could
find not a mention of it in the libraries, nor could any scholar tell me
anything. Douglas Kennedy said that it was most likely the 'magic song'
used in an early Nottingham mummrs' play. This could not be confirmed,
because I couldn't find in any historical account any news of mummers' plays
in that city. Douglas said that even though it was not now remembered, that
of course there HAD been a mummers' play, as every city had one… This
seemed to me to be the most likely explanation, as the words do go along
with the 'topsy-turvy' nature of the plays (clothing exchanged & turned
inside out to hide identities, etc). One old mummer in Marshfield, when I
asked him what the song might mean,
said, '…why, lass, if the meaning's found out- the magic is lost!'

Another interesting thing is that there is not another similar variant of
'Nottamun Town' in this country, or in England. An English group recorded it
years ago, but they had learned it from me, at Newport I think. Can't
remember the group's name, but it had Martin Carthy in it, and maybe Peter
Bellamy. Many folk scholars have noticed and commended our family on our
unique preservation of several old and rare ballads- one is our, 'Fair Annie
of the Lochroyan,' a mixing-up of the words, 'The Lass of Roch Royal.'

Lyrics:
[Em]In Fair Nottamun Town, not a soul would look [G] up

She stood so still, she threw me to the dirt
She tore my hide and she bruised my shirt
From saddle to stirrup I mounted again
And on my ten toes I rode over the plain

They laughed and they smiled, not a soul did look gay
They talked for a while, not a word did they say
I bought me a quart to drive gladness away
And to stifle the dust, for it rained the whole day

Sat down on a hard, hot cold frozen stone
Ten thousand stood round me and yet I's alone
Took my hat in my hand for to keep my head warm
Ten thousand got drownded that never was born